Wearable technologies are getting more and more better. The reason lays with portable fitness friendly gadgets which are not falling under an affordable range. These are exclusive gadgets which are capable of giving you a nice life blog details about things you can do. And they are light weight and easy to use. Today we will be testing and working on Microsoft Band.

This one is a nice fancy band that can be used for doing various things and also acts as a tiny notification band for your messages and fitness work. It falls under the price range of $200 which is not costly if you are a kind of fitness freak. We will see whether this band is enough effective to beat others. We will not be comparing the same with smartwatch because they fall in some other section. Smart watches are a bit more advanced gadgets. Microsoft Band can help you to get notification related information based on your sms, emails and various other app notifications. And this works very well with Windows Phone.

Microsoft added Cortana control on the Band so that you can now control things through your voice. It is just like having a bond watch. Wearable bands are slowly evolving with many new things. The good part of having Microsoft Band is that it offers you a support to work on Windows Phone platform. And with that it also works with iOS and Android. The sensors are enough smart to catch things easily. It has a great design and also looks very nice. It is very easy to configure. The band works with Microsoft Health app which is not fully developed according to me. The battery life also sucks here. Let’s see this in more detail.

Microsoft Band is very much near to a smartwatches. It looks very much real like an analog clock that we wear regularly. It fits well and can be also durable. But still I will not recommend you to push it in bad water. If you find the watch un-comfortable while wearing then you can try adjusting the tightness. The fitting is very easy. I also find this band a bit bulky. Just assume that you are wearing a watch which won’t cause much problem.

Somehow Microsoft must have to work on the design part to make the weight more proportional. Like it must not bend down in one direction. If you are wearing it loose then it will shift to the down side where you can miss the notification. There are in total 10 sensors in Microsoft Band which makes it very accurate and good device. That is the reason I think the battery life gets affected. As per the specification this band can give you 2 days of battery life but when I use it completely it is less than a day. It is good if this band can get a bit smaller so that you can wear it easily or you can just keep that in your pocket if you don’t want.

Microsoft Band has around 10 different sensors including optical heart rate sensor, skin temperature sensor, GPS, gyroscope, capacitive, galvanic skin response, accelerometer, ambient light, mic and ultraviolet light. All these bunch of sensors when are active will surely put a huge impact on the battery life causing it to drain really fast. It also has a 1.4 inch screen which I think is quiet enough to see messages and adjust the settings of band. If you use this band a bit properly like if you turn off things that you don’t want, you can just push the battery life more than 3 days. But you have to manually turn off things in it. Like turning off the gps after when you are done with jogging work. Design point of view Microsoft Band needs a bit more working. Otherwise it is a great band to go for.

Microsoft Band works on windows based firmware. The one which is designed for Windows phone. But it is also compatible with iOS and Android and even some other phones. There are different apps available for the same. But it works best with Windows Phone. That is because in some devices Cortana might not work well. For android, you need Android 4.3 or higher for the same or else it won’t be working. The band works more than just counting steps. As the sensor you had seen it is having a heart beat meter, it has a skin temperature sensor, etc. It will give you a lot of information about your body. The UI is fairly simple to use and easy. Configuration is not complicated from any angle.

You can see the list of messages and you can just remove which you don’t want. You can also swap out the notifications that are not needed. There are different modes that can help you to load settings easily. And if you are willing to use voice command then Cortana is ready for you. Similar to other bands, this band mostly focuses on the fitness part. There might some good apps for the same coming in future which will give you more benefits. Microsoft Health Mobile app is not up to the mark but enough to track things. Like you can track your steps, your sleeps and workout time.

When it comes to wearable bands then we are also having a few cheaper one in the market. These cheaper models are not up to the mark but they are compact and easy to use. They are having many similar features which Microsoft Band gives you. When it comes to Microsoft we need something more better. Something that can be exclusive and beat others in terms of features. There are few good models that are very much near to Microsoft Band but are better. Like Vivosmart. This one is cheaper that Microsoft Band and also it is better. It offers you a lot of things and it is also very compact in design and look. This one can give you notification related to various work, and it also notify you about the software update.

I like the screen quality of Microsoft Band. It is lot more better than regular bands which are having a smaller screen. And the best part of having Microsoft Band is Cortana. If you are having a Windows phone then I am sure you can use it in a lot more better way. You can just tell the watch to disconnect a call or to set an appointment or to find something. In future we might get a lot of compatible apps from Microsoft that will enhance its usage more. For those who are quiet serious about the health issues can go ahead in using the same. Because of its too many sensors it is very accurate. 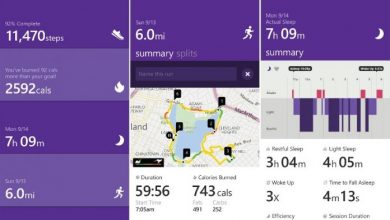